The Science Behind Long Love

What’s the secret to staying madly in love? Is it possible for someone to fall madly in a relationship after being together for 5, 10, 20 years? 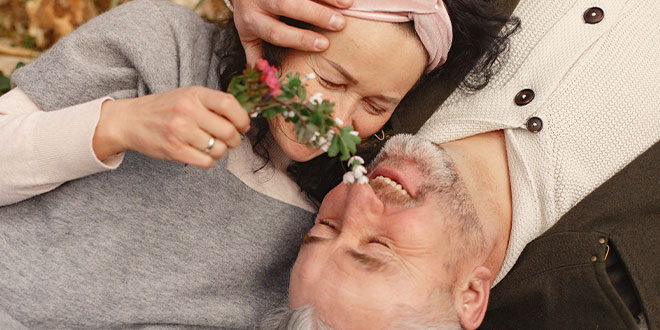 Recent neuroscientific research has brought us closer to answering these questions and decoding the secrets of achieving deep, lasting romantic love.

A study was published online in Social Cognitive and Affective Neuroscience. It examined the brain regions that are linked to long-term romantic relationships.

Researchers compared brain scans from long-term couples to those of newly in love. Surprisingly both couples in the early stages of their romantic relationship and those in long-term intense romantic love showed similar brain activity. These brain regions may be the reason why some couples remain madly in love for years or even decades.

The symptoms of intense romantic love (common in a new relationship) include:

Participants were able to view facial images of their partners while participating in the fMRI. They also viewed control images that included a close friend and an acquaintance who was highly familiar. The brain activity of participants viewing facial images was then compared with the results of a previous experiment in which individuals reported that they were madly in love within the last year.

The neural activity of participants who reported long-term romantic relationships was also compared to results from questionnaires that measured passion, obsession, closeness and friendship.

Researchers were especially interested in the ventral-tegmental region (VTA), a brain region. It is an early-stage reward system rich in dopamine that has been shown to be beneficial in romantic relationships.

It’s possible to be madly in love!

According to the results of the study, intense passion can be sustained in long-term relationships. “We found many very clear similarities between those who were in love long-term and those who had just fallen madly in love,” says Aron. “In this latest study, the VTA showed a greater response to images of a long-term partner when compared with images of a close friend or any of the other facial images.”

The VTA is especially active in romantic love. “Interestingly, the same VTA region showed greater activation for those in the long-term couple group who scored especially high on romantic love scales and a closeness scale based on questionnaires,” Acevedo explains.

Studies in the past have shown that reward-based activity, such at food, cash, or alcohol, can be found in dopamine rich areas such as VTA. Studies have also shown the importance of the VTA for motivation, reinforcement learning, decision making, and other functions. The VTA is crucial for maintaining long-term relationships. This research shows that intense romantic feelings, which are common in early stages of love, can be sustained through long-term relationships if they engage the brain’s motivation and rewards systems.

Other fascinating results were revealed, including some secrets to long-lasting love.

Previous studies have revealed neural activity in the posterior part of the hippocampus in couples who are madly in love. The results demonstrate that feelings of intense, passion, and sexual attraction, which are common in early-stage love can be sustained into long-term romance. Understanding the role and function of the posterior hippocampal is key to understanding how and why it’s possible. This can be difficult because very little information is available about this brain region.

Studies have shown that activation of the posterior hippocampal cortex is linked to hunger and food cravings. This can be explained by higher neural activity in obese people. Studies have also shown that rodents with hippocampus lesions can experience difficulty distinguishing between hunger and fullness. The hippocampus is vital for memory, as we know. This area may be important in helping you remember the rewards and stimuli.

This brain region is linked to cravings and satiating needs. Understanding how couples maintain a sexual interest and passion in long-term relationships can be done by the posterior hippocampus.

Dopamine-rich brain areas are activated by romantic long-term relationships. This dopamine system controls reward and motivation and is evidence that romantic love is a desire to unite with another person.

The activation of dorsalstriatum in long-term love, the area of brain responsible for motor and cognitive control, indicates that romantic love is a goal-directed behavior. Since romantic love is a desire for a union with another, behaviors such as wanting to be close to one’s partner or do things to make the partner happy, are enacted to maintain closeness and union.

The Inclusion of Other in the Self (IOS), scale measures how close a person is to their partner. Study participants’ IOS scores were positively related with the brain regions involved in self referential processing. This indicates that sometimes closeness and union can be achieved by incorporating another person into our self-image.

These fascinating findings about attachment were revealed by the study’s results. Participants’ brain scans showed that the same areas of the brain are involved for long-term romantic affection. These brain regions include the thalamus, substantia nigra and the substantia nigra have high levels of oxytocin or vasopressin receptors. The interesting thing about oxytocin or vasopressin receptors is that they regulate social behavior and monogamy as well as bonding.

Another interesting finding that emerges from this research concerns the body’s regulation of pain and stress and its relationship to romantic love. In intense romantic relationships, certain brain regions, like the dorsal Raphe are activated. The dorsal Raphe is involved in the body’s response to pain and stress. Research has shown that attachments are designed to give you a sense security. Research shows that attachment to an attachment figure can reduce stress and pain. This research shows that long-term, intense romantic love is based on feeling secure and safe.

Research shows a remarkable difference between friendship-based and romantic love. To understand these differences, we must first understand the distinction between “wanting” and “liking.” Research has suggested that wanting and liking are two different motivations, which are mutually exclusive. According to the results of the study, romantic/passionate love was associated with dopamine-rich brain areas that are characteristic of wanting. Friendship-based love was linked to brain areas rich in opiates that are characteristic of liking. According to the data, romantic love can be described as a motivation or drive that is motivated by wanting and focused on a target rather than an emotion or feeling.

The study also shows that, unlike the findings in new relationships, long-term affection activates brain regions related to attachment and liking. We have seen that liking is crucial to friendship-based love. A long-lasting romantic relationship that is intense and close can only be achieved through co-existence of desire motivations, rewards, and through attachment bonding. Studies have shown that it takes almost two years for enduring attachment bonds to form. It could explain why those in love are not as active in liking and attaching to one another as people who have been in long-term relationships.

So what have we learned?

We discovered that individuals experiencing intense romantic long-term affection share striking similarities with those who are just starting to fall in love. (Interesting.) We’ve learned that romantic love can be sustained over the long-term. (Phew, that’s a relief!) That intense, passionate, long-term love is dopamine-rich and comes with a steady reward. (Come again?)

Okay. Understanding how to maintain long-lasting romantic love is key. Long-term, passionate love is a goal-directed behavior that our brains see as an opportunity to earn rewards. The rewards can include a decrease in anxiety and stress, feelings if security, calmness, and union with another. Long-term relationships are those where we refer to our self. We gradually include our partner in our concept of ourselves. Our bond attachment grows as we move from early-stage to long-term love. When we do things that make our partner smile, it enhances and sustains the relationship.

While we might be a way off before having an Idiot’s Guide for Staying Madly in Love, at least we are one step closer. And, hey, just knowing that it’s scientifically possible to stay intensely, madly, passionately in love year after year… after year… is pretty damn promising!