“Uuhhh…” Kayne shuddered as the dull, listless voice scraped up the back of his arms. “I’m lookin’ fer a Kayne Wright?” 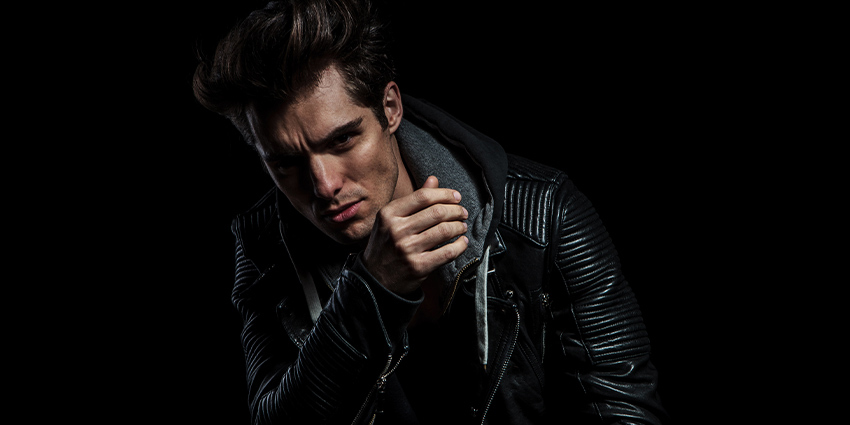 He blinks and swivels in his desk chair to see a tall, thin, blue-colored man standing just a few cubicles below him. He held a small rectangular package, with a tag in white hanging from twine.

“That’s me,” Kayne said, lifting his hand in the air.

The delivery man looked at him, then nodded before moving on. Kayne tried not to be offensive by the body odor and the cheap cologne that covered him like a cloak. “Here ya go,” he said as he handed Kayne the package. “Just sign here fer me.” A small clipboard was held out to him with a pink slip attached to it.

Kayne held his breath and rubbed his nose. He placed the box on his desk and took out a pen to sign the highlighted line.

He nodded and flashed yellow teeth before moving on. Kayne nodded, rubbing his back as he looked at the package on the desk. It was about the same size as his phone, and it was wrapped in thick brown paper. Kayne frowned and picked up the tag to see his name and address, which were neatly inked in black ink. Kayne turned it over and found the other side unfinished. It didn’t have a return address or a name to identify its origin.

“Well that’s not creepy,” he grumbled.

He had a brief thought in his head that his sister might have sent him something to play with him, such as a fake bloody finger. She wrapped the packages in the most gaudy, disgustingly pink wrapping paper that she could find.

“What the hell?” He whispered, brows furrowed.

Who would send a recorder to all his things? Who uses these anymore? Kayne felt confused and returned to the piece on cardstock. He flipped it open. Kayne,

It is written in fluid, neat script.

I’m unable to make it to dinner tonight so I have sent this present in my place. Sorry, I will see you tomorrow.

Heat flooded Kayne’s cheeks as he read, and he quickly hid the note in his backpack under his desk. He looked around at the cubicles to his left and right, checking that no one was looking at him. Kayne was content that no one was watching him and he looked at the gift Nicholai had given him.

His heart gave way and gooseflesh appeared on the forearms. He and Nicholai had been seeing each other for the last month and a half, and Kayne had never felt so… alive.

Kayne had finally come across someone beyond family whose voice didn’t physically irritate or hurt him. So it hadn’t been easy coming to terms with just how Good Nicholai made him feel. Kayne was absolutely distraught after their first night together. He’d gone home with a stranger and done unspeakably delicious things with him all because his voice sent his body into a frenzy and turned his brain into a pile of goo. Kayne had ignored the large Russian-looking man for the first few weeks, blocking out his entire existence with headphones while they travelled home. Kayne knew if he so much as even glanced into those forest green eyes he’d lose all rational thought. But the man had been obnoxiously… persistent. Nicholai was able to wear him down enough that he convinced him to take him out on a date. Kayne began to see Nicholai more frequently.

It had taken a solid couple of weeks for Nicholai’s voice to make him feel something other than sexually frustrated. Although it was unexpected, the first non-sexual touch was not unwelcome. Kayne was stuck for four hours listening to his coworkers’ screams and keyboard clacking after a hard day at work. Without his charger, he’d been forced to endure the onslaught of uncomfortable sounds. He’d collapsed into Josh’s car with a raging migraine and had barely registered Nicholai’s presence until his voice had curled around his waist. It felt like two strong arms held him down, grounding him. It soothed his frayed nerves, and held his fractured skull together. Since then, Nicholai’s voice had evolved to provide him comfort as well as mind-numbing pleasure. Kayne smiled softly as he picked up his recorder and turned it over in the hand before turning the key. The screen flashed blue and ‘Track 01’ appeared in tiny black letters. His smile widened and he reached down to reach for the aux cable for his headphones. Since their first date, Nicholai had tried to get Kayne to start listening to Russian music. It was adorably sweet that he’d made him a playlist.

Kayne plugged the one end into his headphones and the second into the recorder. He placed them over his ears and then tapped the play button. Kayne slid into his chair to relax and listen while he worked. A little static was heard tickling his feet, followed by a click.

“Kayne.” The sound of Nicholai’s voice in his headphones, the words tracing up the back of his thighs, had him freezing mid keystroke. His eyes widening, he had to force his mouth to close. “My Kayne,” Nicholai purred, his voice curling around Kayne’s thighs and latching on tightly. “I thought this might be a good substitute since I cannot be there with you in person.” The pressure on his thighs increased until he spread them to try and relieve some of it, his knees pressing into the underside of his desk. “It is such a shame,” he sighed, the words teasing along Kayne’s neck. “A shame I cannot touch you myself. That my words will have to do it for me.” A familiar pair of calloused thumbs swiped over his nipples making his breath hitch. “Can you feel me?” He rumbled. “Can you feel my words on your skin?” Kayne shuddered as fingertips trailed down his torso to the ‘v’ between his hips. He tried to avoid blurting out any obscenities by sinking his teeth into his lower lips.

“Forcing your thighs apart.” His legs jumped as the words smacked at the inside of his thighs. “Digging my fingertips into the inside of your thighs.” He bit back a moan as blunt nails dug into the sensitive flesh. “I can just imagine your eyes rolling back in your head as my lips tease your cock.” His eyes did just that as a pair of smooth, warm lips skimmed along the underside of his shaft.

“Oh god,” he whispered, his cock straining in his jeans. He cleared his throat quietly and tried to concentrate on his work, despite the sinful sounds in his ears.

Nicholai moaned, the sound sending shivers down Kayne’s spine. “Just thinking of you, flushed and panting. Begging for me.” Another moan echoed in his ears, and he had to bite down on his tongue to stop his own from echoing it. His cock began to pulse when he heard the sound of Nicholai’s jacking off. “So beautiful.” The fingers at his thighs curled up and around his hips to grab his ass. “I can see you bent over the foot of my bed. Legs spread wide as you present yourself to me.” Kayne spread his legs as far as his desk would allow as the hands pulled his ass cheeks apart. “Do you remember the feeling of my teeth sinking into your asscheeks before soothing the sharp ache with my tongue?” He jumped when a set of teeth did just that before the warm tip of a tongue traced over the invisible marks. “Kayne,” Nicholai growled. To tease him, his tongue moved across his skin to the cleft of Nicholai’s ass.

“Fuck!” Kayne slapped a hand over his mouth to muffle the cry as much as possible. He looked around, grateful to those nearest him who had their earbuds in.

“Can you feel my fingers?” The question was hoarsely whispered into his ears, and he found himself nodding in answer. He lifted his hips a little from his chair and his back bent as a thick finger press into his chest. “Pressing into you? Stretching you open?” He found his teeth ripping into his tongue again when a second finger plunged into him. The burn of the stretch was as real as if he were full of his lover’s fingers. Nicholai moaned incoherently, his breath ghosting over the back of Kayne’s neck.

Kayne’s eyes slipped closed, and it felt like he was there in his lover’s bedroom, the cool satin sheets against his skin. He could smell Nicholai’s favorite cedarwood body wash, and the scent spurred his hips to push back against the fingers. He could feel the warmth of the man’s body draped over his shoulders, with his chest hair dragging along his back and his beard rumbling across his shoulder.

“I am sure you want my cock, yes?” Nicholai breathed.

Kayne could not stop screaming in frustration at his sudden loss of fingers. He silently pleaded for Nicholai to fill him back up, and the scorching hot, blunt head of Nicholai’s cock pressing against his entrance had him sighing out of relief. Nicholai spoke slowly, with a dark, raspy chuckle that vibrated his headphones. “I am sure you are begging so prettily for it.” Kayne tensed, digging his nails into the arms of his desk chair as he waited for the ‘but’. “But you will have to wait for it.” There it was. Kayne wanted desperately to scream at the man to give him what he wanted. But he swallowed the words. “I shall see you tomorrow. Good night, Kayne.”

Kayne slowly opened his eyes and the phantom voice vanished. His whole body was tingling with sexual energy. His arms and legs were twitching in the same way. He grimaced at his bulge and glanced down at himself.

Kayne quickly unplugged his recorder and turned it off, before stuffing it in his backpack. He tried to get back to work, but his hands were shaking. As if he wasn’t sitting at work with a raging hard on, and his lover’s words ringing in his ears. His eyes quickly wandered from his computer to his backpack. Maybe Nicholai had meant for him to listen to that at home… The memory of Nicholai sporting a wicked, self-satisfied smirk on their first date as Kayne tried to hide his raging hard on under the table had him rethinking that. It was Nicholai who had sent it to him at work in the middle of the morning.

Kayne jumped as soon as his phone buzzed. Kayne sighed as he pulled out his phone. It was a text. From Nicholai.

Did you enjoy my gift, my Kayne?

Kayne stared at the seemingly innocent words. “That smug asshole.”

Ivy Wynter is an aspirant novelist. She also enjoys designing lingerie and photography. She’s had previous stories published with Volonte, and hopes that everyone enjoys her present and future work.